The researchers write that one of the targets of the unknown attackers was the JSC “State Missile Center named after Academician V. P. Makeev” (JSC “GRTs Makeev”) – a Russian developer of ballistic missiles for submarines, one of the largest research space technology.

The attacks were classic spear phishing, with employees receiving messages containing malicious Office documents. The decoys looked like Word files supposedly created by the company’s HR department. Employees were asked to fill out a form and send it to Human Resources or by responding to a letter. 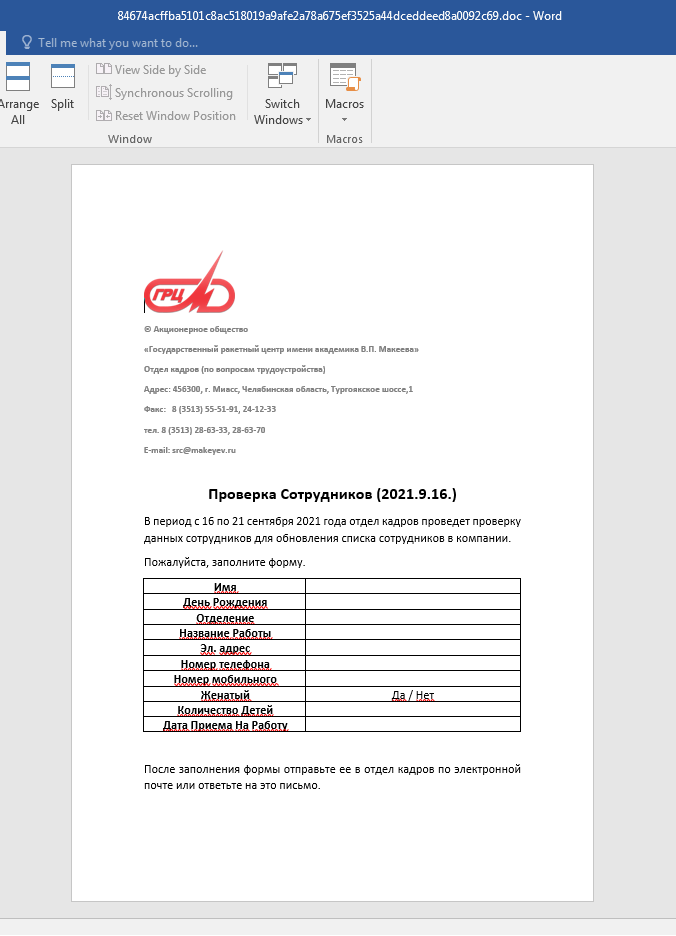 When the recipient decides to fill out the form, they will have to authorize editing. And this is enough to launch an exploit,the experts explain.

The fact is that the attackers exploited the CVE-2021-40444 problem, that is, a 0-day bug in Microsoft MHTML (aka Trident), the proprietary Internet Explorer browser engine.

The vulnerability could be exploited through Office files to run malicious code on unsecured Windows systems.

The attack depends on MSHTML loading a specially crafted ActiveX control when the target opens a malicious Office document. The loaded ActiveX control can then run arbitrary code to infect the system with more malware.Malwarebytes specialist write.

Let me remind you that earlier it was reported that the problem is already being used in real attacks on users of Office 365 and Office 2019 in Windows 10, and soon it became known that public and easy-to-use exploits were available for it. A patch has already been released for the vulnerability.

The researchers also found other Office documents containing the same exploit, but the decoys were written on behalf of the Interior Ministry and disguised as fines.

The title of the documents translates to “Notification of illegal activity.” It asks the receiver to please fill out the form and return it to the Ministry of Internal affairs or reply to this email. It also urges the intended victim to do so within 7 days.researchers explain.

Malwarebytes reports that it has failed to link these documents to specific targets. It is assumed that “government” hackers of a certain country are behind these attacks, but it is not known which one.