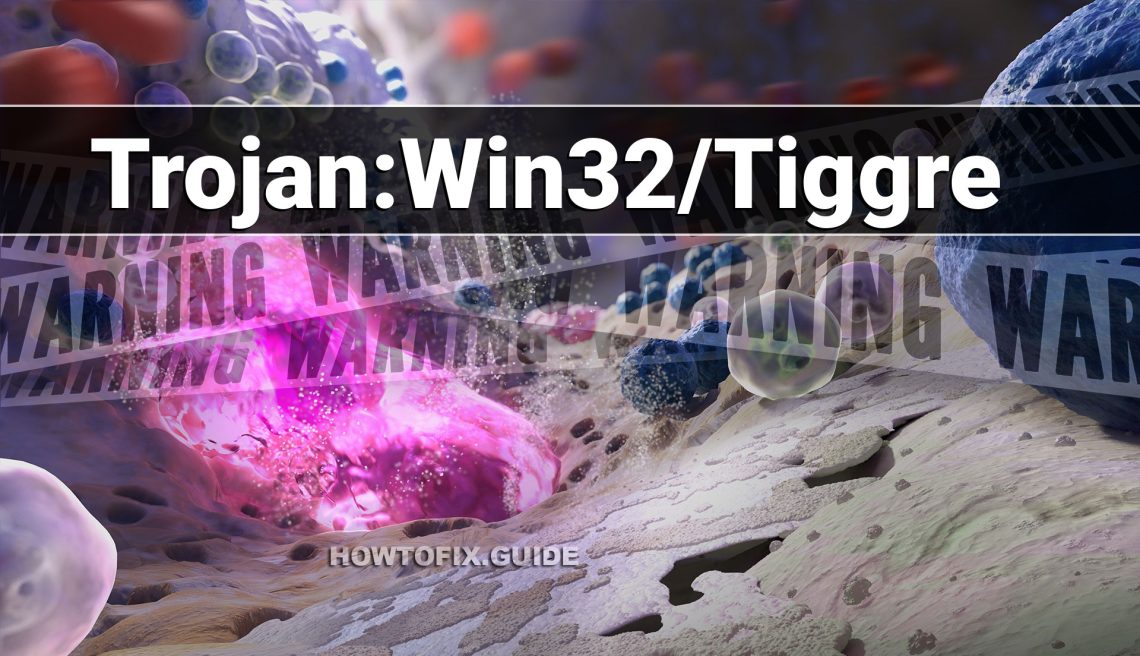 If you spectate the alert of Trojan:Win32/Tiggre detection, it looks like that your computer has a problem. All malicious programs are dangerous, without any exceptions. Tiggre is a malware that aims at opening your PC to further malware injection. The majority of the modern malware variants are complex, and can download other viruses. Getting the Trojan:Win32/Tiggre virus often equals to getting a malicious thing which can act like spyware or stealer, downloader, and a backdoor. Seeing this detection means that you need to perform the malware removal as fast as you can.

Any kind of malware exists with the only target – generate profits on you1. And the developers of these things are not thinking of ethicality – they utilize all available methods. Taking your personal data, receiving the payments for the banners you watch for them, exploiting your system components to mine cryptocurrencies – that is not the full list of what they do. Do you want to be a riding horse? That is a rhetorical question.

What does the pop-up with Trojan:Win32/Tiggre detection mean?

The Trojan:Win32/Tiggre detection you can see in the lower right side is displayed to you by Microsoft Defender. That anti-malware program is quite OK at scanning, however, prone to be generally unreliable. It is vulnerable to malware attacks, it has a glitchy interface and problematic malware removal capabilities. Thus, the pop-up which says about the Tiggre is simply an alert that Defender has actually detected it. To remove it, you will likely need to make use of another anti-malware program. 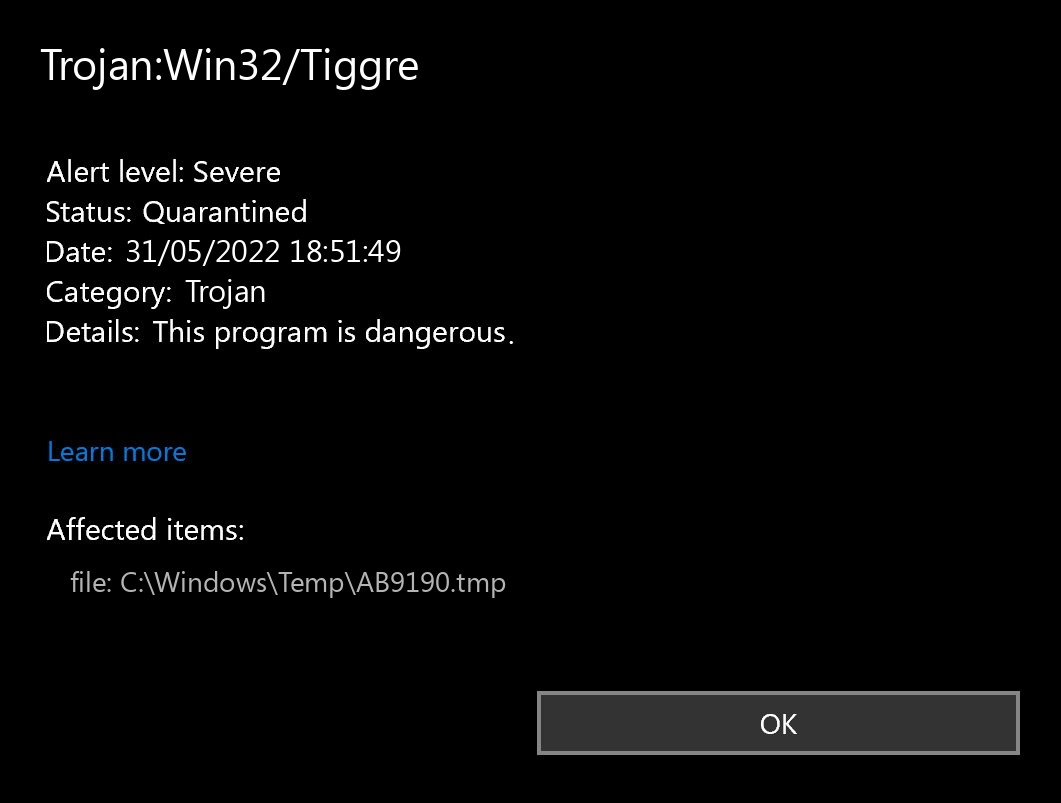 The exact Trojan:Win32/Tiggre infection is a very unpleasant thing. It digs inside of your PC disguised as a part of something benevolent, or as a piece of the app you have got on a forum. Then, it makes everything to make your system weaker. At the end of this “party”, it injects other viruses – ones which are choosen by crooks who manage this virus. Hence, it is almost impossible to predict the effects from Tiggre actions. And the unpredictability is one of the most upleasant things when it comes to malware. That’s why it is better not to choose at all, and don’t give it even a single chance to complete its task.

As I have specified previously, non-harmful malware does not exist. And Trojan:Win32/Tiggre is not an exclusion. This virus changes the system setups, alters the Group Policies and Windows registry. All of these things are vital for proper system operating, even in case when we are not talking about PC safety. Therefore, the virus which Tiggre contains, or which it will download later, will try to get maximum revenue from you. Crooks can steal your personal information, and then push it on the Darknet. Using adware and browser hijacker functionality, built in Trojan:Win32/Tiggre malware, they can make money by showing you the banners. Each view gives them a penny, but 100 views per day = $1. 1000 victims who watch 100 banners per day – $1000. Easy math, but sad conclusions. It is a bad choice to be a donkey for crooks.

It is hard to trace the sources of malware on your computer. Nowadays, things are mixed, and distribution tactics used by adware 5 years ago may be used by spyware nowadays. But if we abstract from the exact distribution tactic and will think of why it works, the answer will be quite uncomplicated – low level of cybersecurity knowledge. People click on advertisements on odd sites, click the pop-ups they receive in their web browsers, call the “Microsoft tech support” believing that the weird banner that states about malware is true. It is essential to know what is legit – to prevent misunderstandings when trying to figure out a virus.

Nowadays, there are two of the most common tactics of malware distribution – bait emails and injection into a hacked program. While the first one is not so easy to avoid – you must know a lot to understand a counterfeit – the second one is very easy to solve: just do not utilize hacked apps. Torrent-trackers and various other providers of “totally free” applications (which are, exactly, paid, but with a disabled license checking) are just a giveaway point of malware. And Trojan:Win32/Tiggre is simply amongst them.

How to remove the Trojan:Win32/Tiggre from my PC?

Trojan:Win32/Tiggre malware is extremely difficult to eliminate by hand. It puts its data in numerous places throughout the disk, and can get back itself from one of the elements. Additionally, numerous changes in the registry, networking setups and Group Policies are fairly hard to find and return to the initial. It is far better to make use of a special program – exactly, an anti-malware program. GridinSoft Anti-Malware will fit the most ideal for malware elimination goals.

Why GridinSoft Anti-Malware? It is very light-weight and has its detection databases updated almost every hour. In addition, it does not have such bugs and vulnerabilities as Microsoft Defender does. The combination of these details makes GridinSoft Anti-Malware suitable for getting rid of malware of any kind.

How to Remove Trojan:Win32/Tiggre Malware 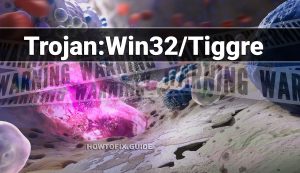 Description: If you have seen a message showing the “Trojan:Win32/Tiggre found”, it seems that your system is in trouble. The Tiggre virus was detected, but to remove it, you need to use a security tool. Windows Defender, which has shown you this message, has detected the malware. However, Defender is not a reliable thing - it is prone to malfunction when it comes to malware removal. Getting the Trojan:Win32/Tiggre malware on your PC is an unpleasant thing, and removing it as soon as possible must be your primary task.