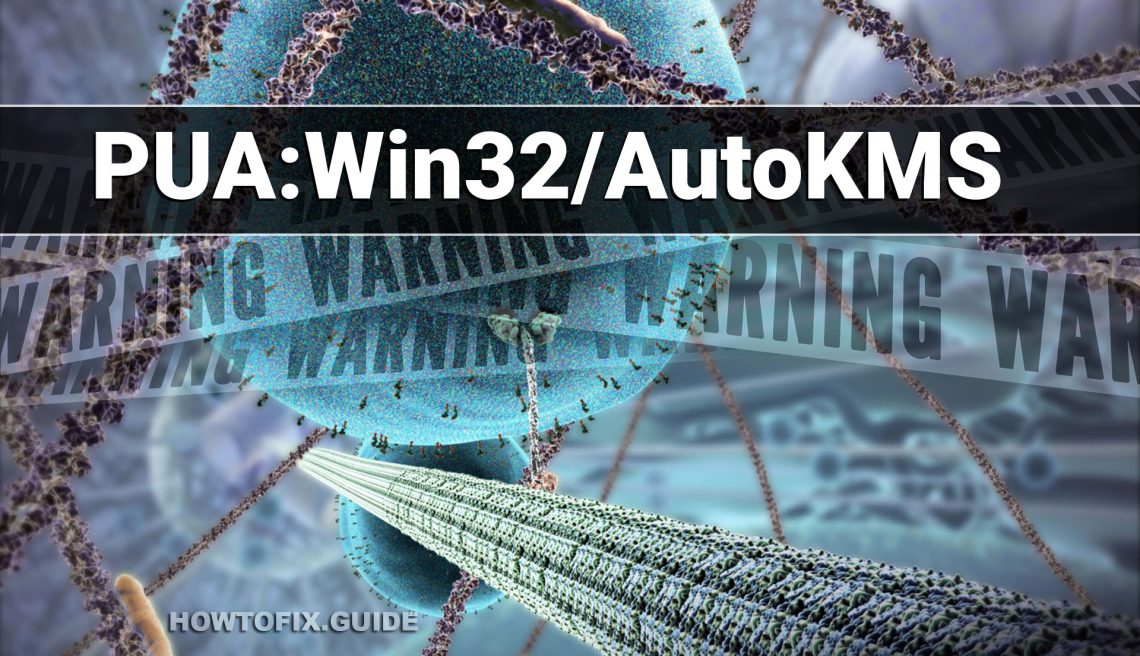 If you spectate the notification of PUA:Win32/AutoKMS detection, it looks like that your computer has a problem. All viruses are dangerous, with no exceptions. AutoKMS unwanted application can not be named full-fledged malware. However, it has a lot of signals to state that you will not like the changes this thing brings to your PC. PUAs like that may be just a pesky thing, either create a serious influence on your system’s performance. Additionally, there are a lot of cases when users mention that this app acts like spyware or backdoor.

Any type of malware exists with the only target – generate profits on you1. And the programmers of these things are not thinking of morality – they utilize all possible tactics. Stealing your personal data, receiving the comission for the advertisements you watch for them, exploiting your system components to mine cryptocurrencies – that is not the full list of what they do. Do you want to be a riding steed? That is a rhetorical question.

What does the pop-up with PUA:Win32/AutoKMS detection mean?

The PUA:Win32/AutoKMS detection you can see in the lower right corner is shown to you by Microsoft Defender. That anti-malware program is quite OK at scanning, however, prone to be mainly unreliable. It is defenseless to malware invasions, it has a glitchy interface and problematic malware clearing capabilities. Therefore, the pop-up which says concerning the AutoKMS is just an alert that Defender has actually recognized it. To remove it, you will likely need to make use of a separate anti-malware program. 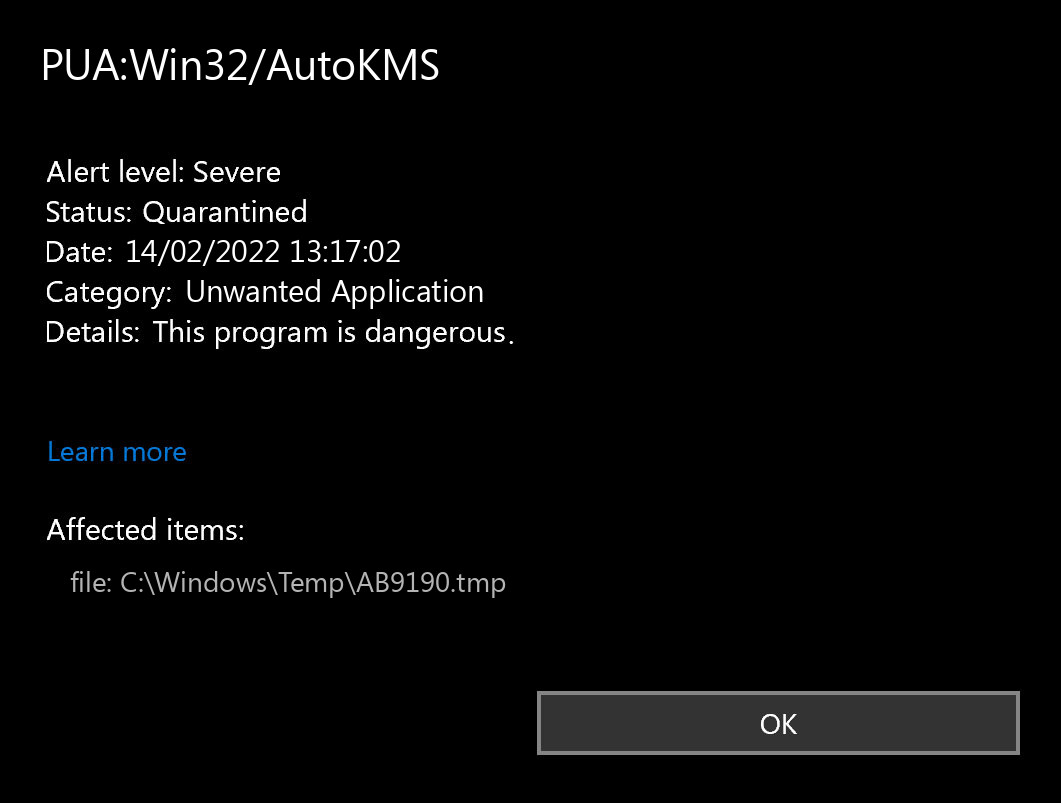 PUA:Win32/AutoKMS unwanted program is a case in point of PUA, which are pretty much common nowadays. Being free to use, it can provide you “the extended features” for the extra money. Some instances of this program type can have no real functions at all – just the shell with the bright interface. You can see it advertised as a Windows activation tool. This or another way it does not give you any actual capability, exposing you to risk instead. By the way, AutoKMS is useless for activating the newest version of operating system from Microsoft – Windows 11.

I have already specified that PUA:Win32/AutoKMS PUA is not as trustworthy as it pretends to be. The “legit and helpful” program may abruptly unveil itself as a downloader trojan, spyware, backdoor, or coin miner malware. And you can never predict what to expect even from separate variants of AutoKMS unwanted program. That still does not mean that you need to panic – perhaps, this unpleasant thing has not succeeded to do negative things to your computer.

The particular damage to your system may be caused not just as a result of the malware injection. A huge share of suspicious programs, like the AutoKMS app is, is just improperly designed. Possibly, their actions are quite helpful than useless if done on particular system configurations, however, not on each one. That’s how a basic system optimization program can trigger mayhem with constant BSODs on your system. Any type of interruptions to the system registry are risky, and they are a lot more unsafe if done with such programs.

It is hard to line the origins of malware on your PC. Nowadays, things are mixed, and distribution methods chosen by adware 5 years ago may be used by spyware these days. However, if we abstract from the exact distribution method and will think about why it works, the reply will be quite basic – low level of cybersecurity understanding. Individuals click on promotions on odd websites, click the pop-ups they receive in their web browsers, call the “Microsoft tech support” thinking that the scary banner that says about malware is true. It is very important to know what is legit – to stay away from misunderstandings when attempting to identify a virus.

Nowadays, there are two of the most common ways of malware spreading – lure emails and injection into a hacked program. While the first one is not so easy to stay away from – you need to know a lot to recognize a counterfeit – the second one is easy to handle: just don’t utilize cracked applications. Torrent-trackers and various other sources of “free” applications (which are, actually, paid, but with a disabled license checking) are just a giveaway place of malware. And PUA:Win32/AutoKMS is simply amongst them.

How to remove the PUA:Win32/AutoKMS from my PC?

PUA:Win32/AutoKMS malware is extremely difficult to eliminate manually. It stores its data in numerous locations throughout the disk, and can get back itself from one of the parts. Moreover, countless alterations in the windows registry, networking setups and also Group Policies are pretty hard to locate and change to the initial. It is much better to utilize a special program – exactly, an anti-malware tool. GridinSoft Anti-Malware will fit the most ideal for virus removal goals.

How to Remove PUA:Win32/AutoKMS Malware 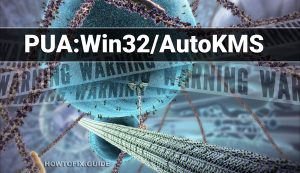 Description: If you have seen a message showing the “PUA:Win32/AutoKMS found”, it seems that your system is in trouble. The AutoKMS virus was detected, but to remove it, you need to use a security tool. Windows Defender, which has shown you this message, has detected the malware. However, Defender is not a reliable thing - it is prone to malfunction when it comes to malware removal. Getting the PUA:Win32/AutoKMS malware on your PC is an unpleasant thing, and removing it as soon as possible must be your primary task.