The attacker infiltrated the Argentine government’s network and stole a database containing the identity cards of the entire population of the country. This information is now up for sale on the hacker forum.

The hack happened last month and was aimed at RENAPER (Registro Nacional de las Personas), that is, the National Register of Individuals. It is a key link within the Argentine Ministry of the Interior, which issues identity cards and stores information about them in a digital database format. This database is also available to other government agencies and provides the foundation for most government inquiries regarding personal information about citizens.

The Record reports that the first signs of the RENAPER hack emerged back in early October on Twitter, when the newly registered account @AnibalLeaks posted photographs of ID cards and personal details of 44 Argentinean celebrities (including President Alberto Fernandez, several journalists and politicians, and football superstars Lionel Messi and Sergio Aguero). 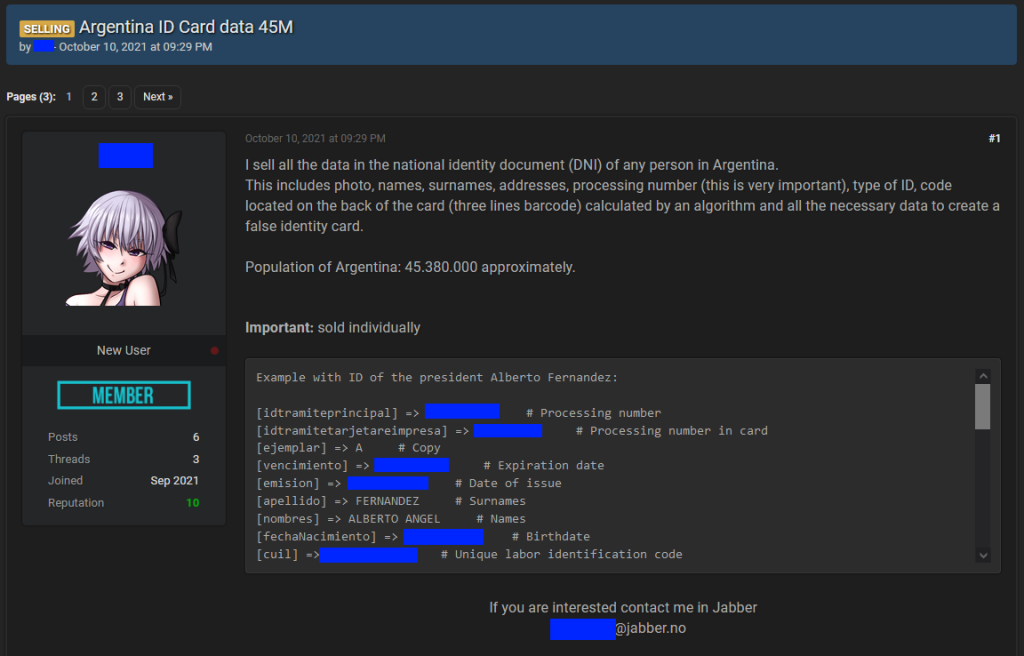 A day after that, the hacker posted an advertisement for the sale of data on a well-known hacker forum, announcing that he was ready to provide the customer with the personal data of any Argentine citizen.

When information about the leak got into the media, the Argentine government was forced to admit the fact of compromise. In particular, the Ministry of the Interior reported that a VPN account owned by the Ministry of Health was used to extract nineteen photos from RENAPER “at the very moment they were posted on Twitter”.

However, officials say that “the [RENAPER] database has not been affected by any hacks or leaks,” and an investigation is under way against eight government officials who are suspected of being involved.

However, The Record journalists managed to get in touch with the seller of the stolen database, and the hacker said that he had exactly a complete copy of RENAPER, which contradicts the official statement of the authorities. As evidence, the attacker provided the publication with the personal data of a random citizen of Argentina, previously selected by the editorial board.

Maybe in a few days I will publish [the data] of one or two million people.the hacker added in a conversation with reporters.

And also assured that he plans to continue selling access to the data to everyone.

Based on the template posted by the attacker, he has access to the full names of residents, their home addresses, dates of birth, gender information, date of issue and expiration of the ID, as well as photo ID, access to Trámite numbers, and so on. Argentina’s current population is about 45 million, and although it is not known how many records are in the RENAPER database, the hacker claims to have data on all the citizens of the country.

Let me remind you that we also talked about the fact that Air India reports data leak of 4.5 million passengers.