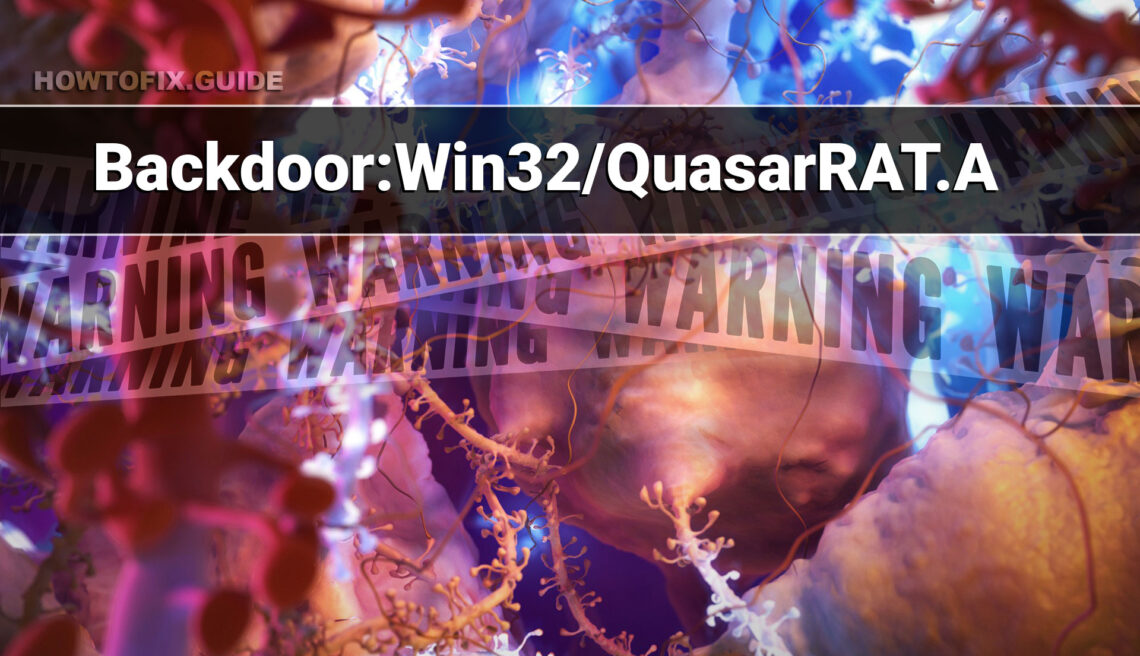 If you spectate the notification of Backdoor:Win32/QuasarRAT.A detection, it seems that your computer has a problem. All malicious programs are dangerous, with no exceptions. QuasarRAT delivers the cybercriminals access to your PC, or even connects it to the botnet.

Any malware exists with the only target – make money on you1. And the developers of these things are not thinking of morality – they utilize all possible ways. Grabbing your private data, receiving the payments for the ads you watch for them, utilizing your PC to mine cryptocurrencies – that is not the full list of what they do. Do you want to be a riding steed? That is a rhetorical question.

What does the notification with Backdoor:Win32/QuasarRAT.A detection mean?

The Backdoor:Win32/QuasarRAT.A detection you can see in the lower right side is shown to you by Microsoft Defender. That anti-malware application is good at scanning, but prone to be basically unreliable. It is vulnerable to malware attacks, it has a glitchy interface and bugged malware clearing features. For this reason, the pop-up which states concerning the QuasarRAT is rather just an alert that Defender has spotted it. To remove it, you will likely need to make use of another anti-malware program. 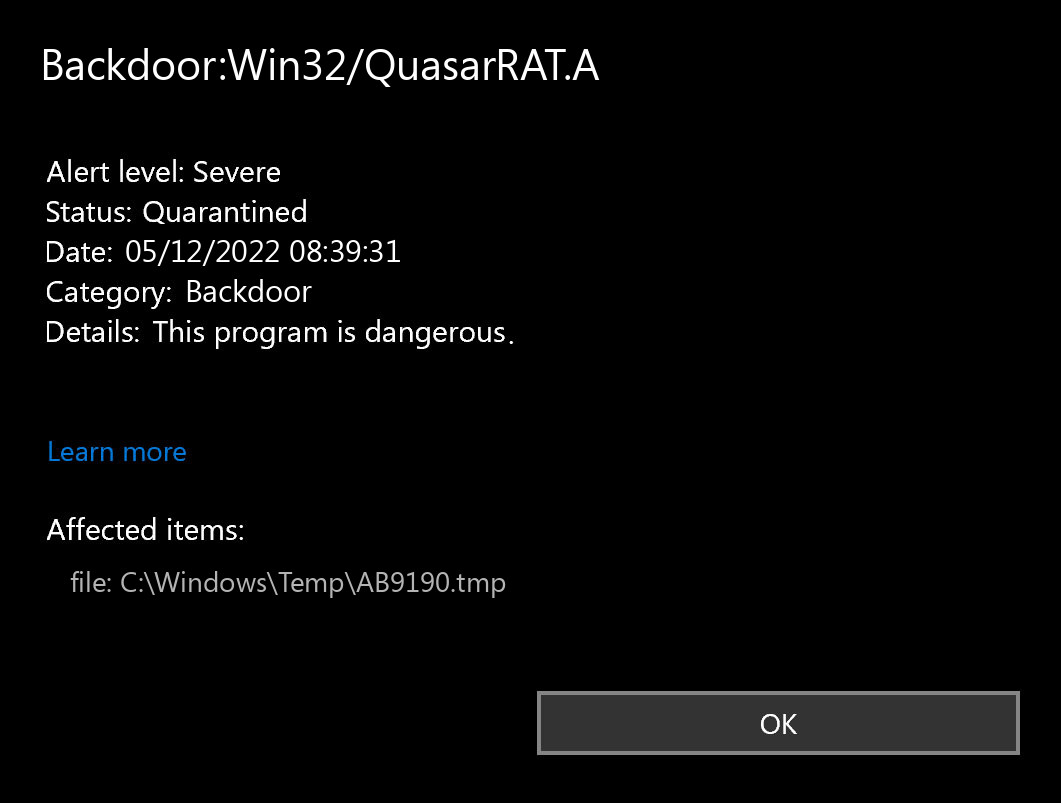 The exact Backdoor:Win32/QuasarRAT.A virus is a really unpleasant thing. This malware is developed to be a sneaky burglar, which serves as a remote-access tool. When you provide someone else remote access willingly, it is okay, but QuasarRAT will not ask you if you want to provide it. After connecting to your system, crooks are free to do whatever they want – grabbing your files, browsing your messages, gathering personal information, et cetera. Backdoors commonly carry a supplementary stealer – the virus that is developed to collect all possible data about you. However, a lot more prevalent use of the backdoors is creating the botnet. After that, the network of infected PCs can be put to use to conduct DDoS attacks or to inflate the survey results on various websites.

Backdoors are viruses that can acquire both separated and integrated shapes. Once you can find that a legitimate program from a famous developer has a functionality that allows someone to connect to your system. Will it be someone from the developers or a third party – nobody knows. However, the scandal when this feature is identified in a legitimate program is nearly impossible to miss. There is also chatter that there is a hardware-based backdoor in Intel CPUs2.

As I have actually stated previously, non-harmful malware does not exist. And Backdoor:Win32/QuasarRAT.A is not an exception. This backdoor does not deal a lot of harm just after it releases. Nevertheless, it will be a really unpleasant surprise when an occasional forum or page in the Web will not let you in, because your IP-address is banned after the DDoS attack. But even if it is not vital for you – is it enjoyable in any way to realize that someone else can easily access your PC, read your conversations, open your documents, and spectate what you do?

The spyware that is frequently present as a supplement to the Backdoor:Win32/QuasarRAT.A malware will be just one more reason to remove it as fast as you can. Nowadays, when users’ information is valued remarkably high, it is too silly to give the burglars such a chance. Even worse if the spyware will in some way manage to take your financial info. Seeing zeros on your bank account is the worst headache, in my point of view.

It is not easy to trace the origins of malware on your computer. Nowadays, things are mixed up, and distribution methods used by adware 5 years ago can be used by spyware these days. However, if we abstract from the exact spreading tactic and will think about why it has success, the explanation will be really uncomplicated – low level of cybersecurity understanding. People click on promotions on odd websites, open the pop-ups they receive in their web browsers, call the “Microsoft tech support” believing that the odd banner that states about malware is true. It is important to recognize what is legit – to prevent misconceptions when attempting to figure out a virus.

Nowadays, there are two of the most widespread ways of malware distribution – bait e-mails and injection into a hacked program. While the first one is not so easy to stay away from – you must know a lot to understand a fake – the second one is easy to address: just don’t utilize hacked apps. Torrent-trackers and various other sources of “totally free” applications (which are, exactly, paid, but with a disabled license checking) are just a giveaway place of malware. And Backdoor:Win32/QuasarRAT.A is just amongst them.

How to remove the Backdoor:Win32/QuasarRAT.A from my PC?

Backdoor:Win32/QuasarRAT.A malware is extremely difficult to erase by hand. It stores its documents in numerous locations throughout the disk, and can recover itself from one of the elements. In addition, a range of modifications in the registry, networking settings and also Group Policies are quite hard to discover and revert to the initial. It is better to utilize a specific app – exactly, an anti-malware app. GridinSoft Anti-Malware will fit the most ideal for malware elimination reasons.

How to Remove Backdoor:Win32/QuasarRAT.A Malware 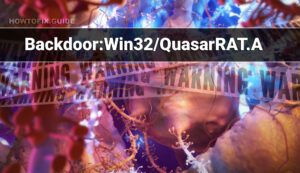 Description: If you have seen a message showing the “Backdoor:Win32/QuasarRAT.A found”, it seems that your system is in trouble. The QuasarRAT virus was detected, but to remove it, you need to use a security tool. Windows Defender, which has shown you this message, has detected the malware. However, Defender is not a reliable thing - it is prone to malfunction when it comes to malware removal. Getting the Backdoor:Win32/QuasarRAT.A malware on your PC is an unpleasant thing, and removing it as soon as possible must be your primary task.