Afghanistan became the main target for ransomware attacks around the world in the past month, according to analysis of data from the Atlas VPN group.

The recent seizure of power in Afghanistan by the Taliban has brought chaos to the country. This attracted the attention of various cybercriminals like bees to honey – the mess is an ideal environment to get rich. Ensuring the safety of employees and clients of various companies will be extremely difficult on the territory under Taliban rule. 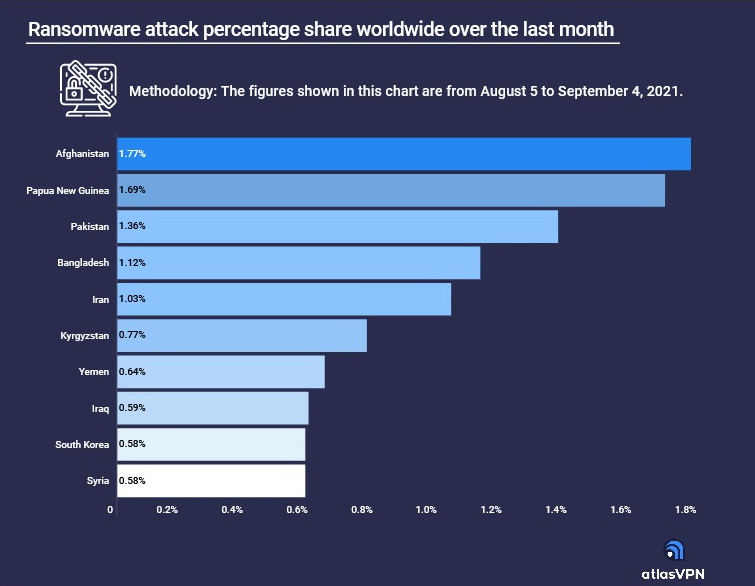 The data is based on the Kaspersky Cyberthreat Map, which collects worldwide statistics on various cyberattacks. The numbers analysed in this report refer to the period from August 5 to September 4, 2021.

Over the past 30 days, cybercriminals have carried out 1.77% of all ransomware attacks in Afghanistan.

The hackers noted that business in the country is now very vulnerable. Many professionals are unable to return to work or have left Afghanistan with the US military. The Taliban advance made it difficult for local small companies to operate due to constant supply chain and transportation disruptions.

A successful ransomware attack on an Afghan business could destroy it completely. It will not be easy for companies to pay the ransom as bank owners fear business closure while thousands of Afghans gather in droves to collect their earnings.Atlas VPN analysts warn.

Most ransomware works in a similar way, encrypting user information and requesting a ransom to unblock it. However, hackers prefer to use different types of malware depending on their technical level and what kind of business or person they are targeting.

Atlas VPN also compiled a rating of malware that is now involved in attacks on Afghanistan and other countries.

Let me remind you that we also talked about the fact that DeadRinger attack targets telecommunications companies in Southeast Asia.